A note about Wallarm clouds

FAST interacts with one of the available Wallarm clouds.

All information from the documentation is equally applicable to all the clouds, unless stated otherwise.

For the sake of simplicity, it is assumed throughout the documentation that FAST interacts with the American Wallarm cloud. If you need to interact with another cloud, use the corresponding addresses of the Wallarm portal and the API server.

The relationships between the entities (see below) and the testing scenarios that are described in this chapter relate to testing with the use of the Wallarm API. This kind of testing employs all entities; therefore, it is possible to provide the reader with integral insights into how these entities interact with each other.

When integrating FAST into a CI/CD workflow, these entities remain unchanged; however, the order of steps may differ for a particular case. Read this document for extra details.

FAST makes use of the following entities:

There are a few important relationships between the entities mentioned earlier:

The Entities Used by FAST

The FAST node acts as a proxy for all requests from the request source to the target application. According to Wallarm terminology, these requests are called baseline requests.

When FAST node receives requests, it saves them into the special “test record” object to later create security tests based on them. According to Wallarm terminology, this process is called “baseline requests recording”.

FAST creates a security test set from baseline requests that are stored in the test record.

Alternatively, it is possible to populate a test record without creation of a test run. To do so, you must run the FAST node in recording mode. See this document for details.

Given that the test record is populated with requests, it is possible to use it with another test run if an application under the test can be evaluated for vulnerabilities using a subset of the baseline requests stored in the test record.

A single test record could be employed by multiple FAST nodes and test runs. This may be useful if: 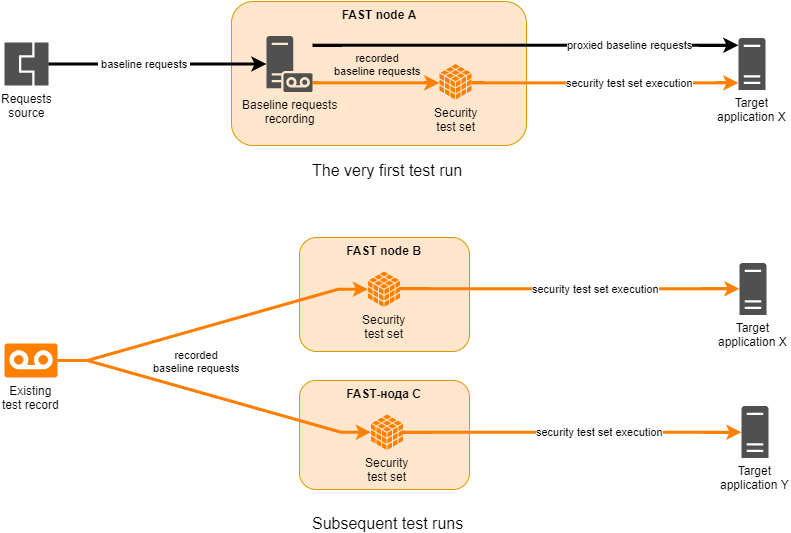 A test policy defines a set of rules for conducting the process of vulnerability detection. In particular, you can select the vulnerability types that the application should be tested for. In addition, the policy determines which parameters in the baseline request are eligible to be processed while creating a security test set. These pieces of data are used by FAST to create test requests that are used to find out if the target application is exploitable.

You can create a new policy or use an existing one.

The choice of the test policy depends on how the tested target application works. It is recommended that you create a distinct test policy for each of the applications you test.

A test run describes the single iteration of the vulnerability testing process.

FAST node employs these values while conducting a security test of a target application.

Each test run is tightly coupled with a single FAST node. If you create a new test run B for the FAST node while there is another test run A in progress for this node, then the test run A’s execution is aborted and replaced by test run B.

It is possible to create a test run for two different testing scenarios:

When you create or copy a test run, its execution begins immediately. Depending on the testing scenario in action, the execution process will follow different steps (see below).

When you create a test run, its execution begins immediately and follows the following steps:

Stopping the baseline requests' recording process has no impact on the processes of creation and execution of the test requests.

The processes of baseline requests recording and the creation and execution of the FAST security tests run in parallel:

Note: the chart above shows the flow described in the FAST quick start guide. A flow with baseline requests recording is suitable either for manual security testing or automated security testing using CI/CD tools.

In this scenario, Wallarm API is required to manipulate the test run. See this document for details.

When you copy a test run, its execution begins immediately and follows the following steps:

The process of baseline request extracting takes place prior to the creation and execution of the FAST security tests:

Note that it is the execution flow that is used in the FAST quick start guide. The flow that makes use of pre-recorded baseline requests is suitable for automated security testing with use of CI/CD tools.

In this scenario, the Wallarm API or FAST node in CI mode can be used to manipulate the test run. See this document for details.

The chart below shows the most commonly encountered CI/CD workflow, which complies with the timeline shown above:

While reading this guide, you will learn how to manage the test run execution process using API calls, specifically:

You need to obtain a token in order to make such API calls and to bind the test run to the FAST node.

A FAST node comprises of:

A token binds the running Docker container with the FAST node in the cloud:

To deploy a FAST node, do the following:

The token serves the following purposes as well:

You could create as many FAST nodes in the Wallarm cloud as you need and obtain a token for each of the nodes. For example, if you have several CI/CD jobs where FAST is required, you may spin up a FAST node in the cloud for each job.

It is possible to reuse tokens you obtained earlier if the tokens are not in use by other active Docker containers with the FAST node (e.g., any Docker container with a node that employs the same token is stopped or removed): 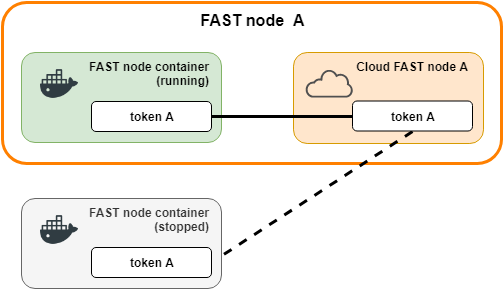